Keller 40th Anniversary in the UAE

In 1976, a Keller branch for the United Arab Emirates region was setup and with it the beginning of a successful story. Initially setup to cater to the country’s huge demand for ground improvement, such as Vibro Compaction and Vibro Replacement and gradually expanding into more of Keller’s geotechnical solutions. Consequently, as the construction and geotechnical market evolved in the country so did Keller with offering a wider range of geotechnical solutions such as Vibro techniques, Anchoring and Specialty Grouting.

Fast-forward to today, Keller has participated in many landmark projects in the region and feels proud to have played its part in the incredible growth story of Abu Dhabi and Dubai that have evolved from barren oil-rich deserts to one of the most vibrant cities in the world with long skylines of skyscrapers. Amongst the most successful iconic developments in the Emirates, Palm Jumeirah the mad-made island, Keller has applied its Vibro Compaction technology for densification of the sands used to create the artificial islands. Various structures from hotels, resorts to villas are safely founded on Keller’s ground improvement technology. In Abu Dhabi, Keller executed major contracts for the oil industry such as the Ruwais Refinery and the reclaimed Upper Zakum Islands, located 80km off the coast of Abu Dhabi. The most recent and the largest ever single contract signed by Keller includes the 8 million m2 of Capital District – Emirati Neighborhood project in Abu Dhabi, where a bouquet of ground improvement technologies will be applied including at a very large scale grouting of cavities in rock formation.

The 40th year anniversary in the Emirates was celebrated at the Jebel Ali Golf Resort in Dubai which was attended by Keller employees, key clients and representatives of our sponsors from Abu Dhabi and Dubai. The program of the 40th anniversary commenced with a short key note address by Guido Freitag, the General Manager, welcoming the guests and congratulating its staff for their sincere contribution in the past 40 years. Our Managing Director for the Business unit Middle East, Geert Janssen, showed the past and current status of famous landmark locations in the Emirates, appreciating the remarkable growth of the Emirates that also celebrated its 45th year of Independence this year on December 2nd. A historical overview of major projects executed by Keller in the past 40 years was presented by Shad Khan, Business Development Director, who is amongst the pioneers that played a key role in the progressive development of the Emirates branch. This session of speeches ended with an inspiring statement from Guido Freitag that Keller shall continue to build safe foundations in the Emirates and lead by example. Before opening the sumptuous dinner a round of applause was given to a special group of Keller employees as they received Keller’s Long Service Award and a certificate from the German Chamber of Commerce & Industries for 10 and 25 years of service. 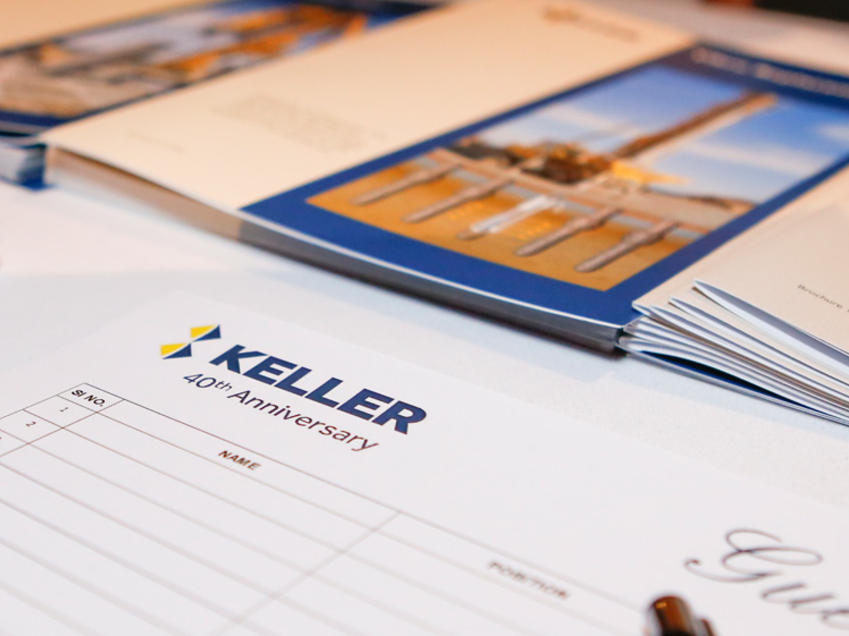